The achievements of Early Warning Europe were presented at a conference held today in Brussels, where EU decision-makers learned about the project’s results, and the launch of a permanent European Network for Early Warning was announced.

The main goal of the Early Warning Europe project is to prevent insolvency by helping businesses to be more sustainable and successful. Since 2016, in the framework of this project, and based on the experience in Belgium, Denmark and Germany, Early Warning services have been developed in Greece, Italy, Poland and Spain, and more than 3,000 companies going though difficulties have benefited from advice and support provided by project partners in these countries. Furthermore, Early Warning schemes are also being established in Croatia, Finland, Hungary, Lithuania, Luxembourg and Slovenia.

The results of the Early Warning Europe project are directly relevant to the implementation of Directive (EU) 2019/1023 on preventive restructuring frameworks, on discharge of debt and disqualifications, and on measures to increase the efficiency of procedures concerning restructuring, insolvency and discharge of debt. Article 3 requires Member States to ensure that debtors have access to early warning tools which may include “advisory services provided by public or private organisations”. The experience of the EWE project can support Member States in setting up such services in the next few years.

Arnaldo Abruzzini, CEO of EUROCHAMBRES said: “Businesses are the core of the European economy, but sometimes they need advice and support in order to survive and thrive. The value of Early Warning Europe is the practical application of the principle of “prevention is better than cure” by detecting a possible disease before it became a problem. Early Warning Europe has shown the way to helping companies address their problems and achieve long-term success.”

Veronique Willems, Secretary-General of SMEunited added that: “The Early Warning Europe project has been the laboratory for developing and adapting early warning tools and services across Europe, taking into account the local situation. We are now ready to foster these kinds of services in all EU Member States working on the implementation of the Directive.”

David Caro, President of ESBA said that: “We are proud to belong to this network and proud of how many entrepreneurs it has helped in its short lifetime. We have to shed the taboo we Europeans have around bankruptcy and giving entrepreneurs a second chance and this network has made huge strides in the right direction.” 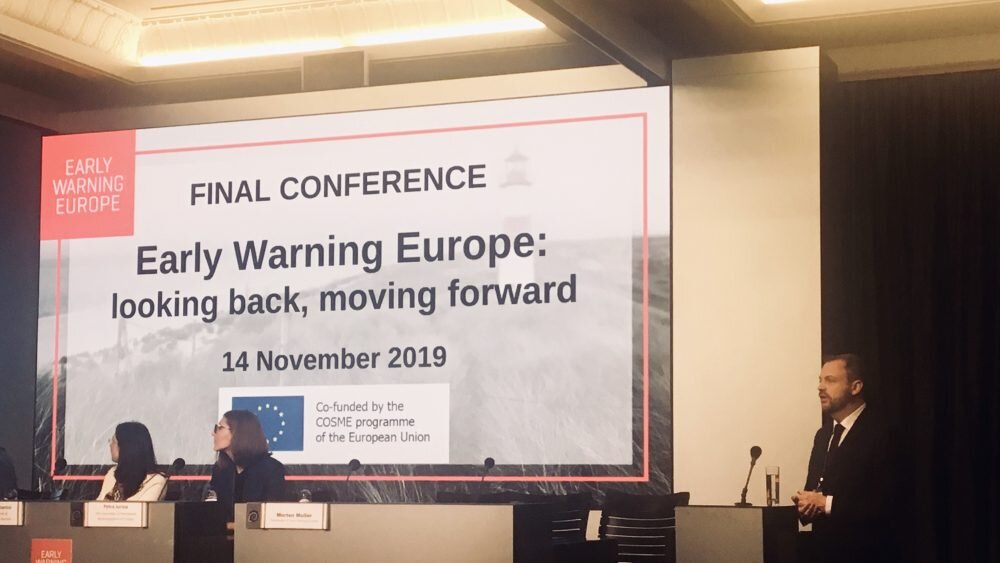